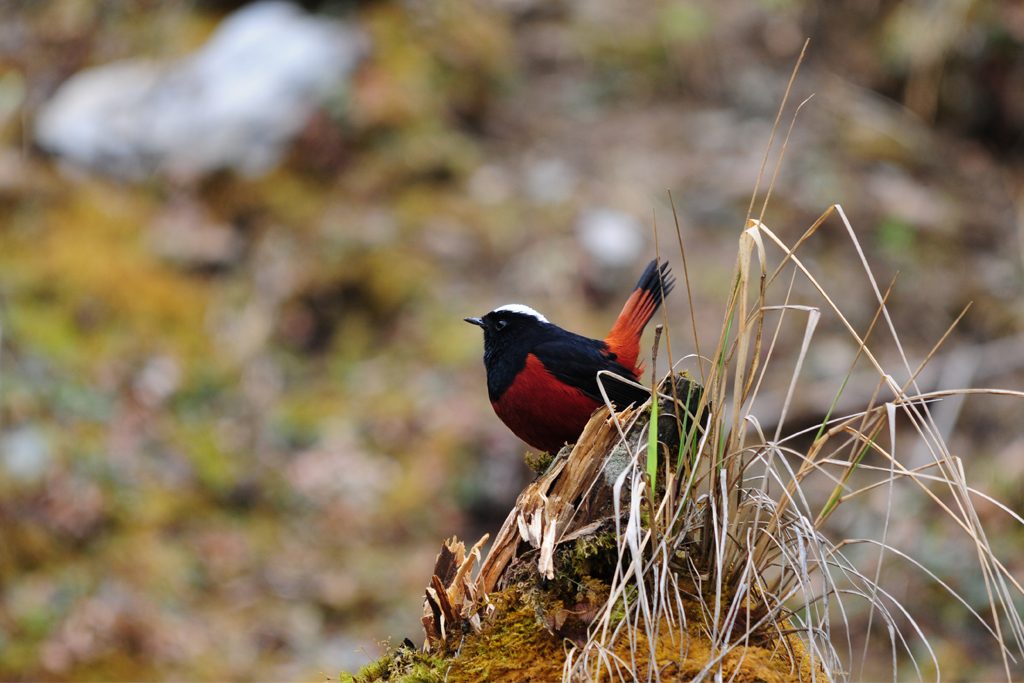 HIGHLIGHTS OF THE BIRD WATCHING TOUR IN BHUTAN

Bhutan is a paradise for bird lovers and ornithologists. Over 670 species of birds have been recorded and many more are yet to be discovered. Around 50 species of the known birds are winter migrants. These include ducks, waders, birds of prey, thrushes, finches and buntings.

Bhutan is home to many species of birds that are in danger of extinction, including the Imperial Heron, which is one of the fifty rarest birds in the world and the rare Black-Necked Crane, which breeds in Tibet and then migrates over the Himalayas to Bhutan during the winter months. The Cranes can be spotted in Phobjikha Valley in Western Bhutan, Bumthang in Central Bhutan and in Bumdeling in Eastern Bhutan. They migrate to these winter roosting sites in the months of September and October and fly back to Tibet between February and March.

Upon arrival at Gauwahati Airport, you will be welcomed by our company representative and transferred to Samdrup Jongkhar. You will drive by small villages, past bicycle paths through the famous Assam Tea garden. In the evening free for a leisure walk to explore Samdrup Jongkhar town. Overnight at Samdrup Jongkhar.

Today after early breakfast, drive a distance of 180 km towards Trashigang. Spend the morning exploring the foothills above Samdrup Jongkhar that hosts a number of lowland species such as Wreathed, Oriental Pied and Great Hornbills, Mountain Hawk-Eagle, Mountain Imperial Pigeon, Pin-tailed Green Pigeon, Black-napped Monarch, Scarlet Minivet, Black-crested, Ashy and Black Bulbuls, Golden-fronted Leaf bird, bamboo-dwelling Yellow-bellied Warbler, Sultan Tit, Asian Fairy-bluebird and Long-tailed Broadbill. Your today’s lunch will be at Warmrong. After Lunch you will continue to drive through Kharung La pass to khaling, we’ll be birding in mid altitude broad-leaved forest for Beautiful Nuthatch, Black-faced Warbler, Grey-headed Canary-Flycatcher, Striated Laughing thrush and others. Descending down the road will take you to Trashigang. Overnight in Trashigang.

The road ascends towards the Kori La Pass 23900 M (Gradient 4-6%), opening out onto breath-taking mountains and villages. En route especially between Korila Pass and Ngatsang village, there are prime birding habitats. There will be enough birds to keep you busy such as Super Skulked, Red Faced Liocichla, few species of Laughing Thrushes, Black Eagle, Oriental Cuckoo, Speckled Wood Pigeon, Brown Parrot Bill, Darjeeling Woodpecker etc. In the evening free for a leisure walk to explore Mongar Town. Overnight in Mongar.

From Mongar, road descends towards the Kurichu river bridge, where you will feel the drastic change of temperature. The area here called Limithang to Yongkola is one of Bhutan’s prime birding areas and is often touted as one of the best birding sites in the world. We will have all the time to enjoy birding in lower and upper Limithang road, where we may see Wedge-billed Wren Babblers, Rufous-throated Wren Babbler, Spotted Wren Babblers, Rufous-necked Hornbill, Coral-billed Scimitar Babblers, Slender-billed Scimitar Babblers, flocks of Parrotbills, Golden-breasted Fulvetta, Scarlet Finches and many more. Overnight at Yongkola

After breakfast, we drive up the Namling to arrive at Sengor village (2950m). Continuing our journey towards the Thrumshingla pass shrouded in thick hemlock and rhododendron forest. The area around here is a part of Thrumshingla National Park. Here you will be birding some high-altitude birds such as the beautiful Blood Pheasant, the strikingly-patterned Snow Pigeon, Spotted Laughing thrush, Gold crest, Golden Bush Robin, Rufousvented Tit and Himalayan Beautiful Rose finch. Below the pass, there is thick dwarf bamboo groove where you may see Red Panda. You will continue drive towards the cultural heartland of Bumthang. Overnight at Bumthang

We will explore many sacred temples and monasteries in Bumthang. Some of the prominent monuments are Jambay Lhakhang, Tamshing monastery, Kurjey Lhakhang, Jakar Dzong, short hike in Swiss Farm area. Overnight in Hotel.

Today you will drive back to Trongsa from Tingtibi on will give opportunity to stop and explore those places we will have missed earlier due to a longer drive. At Trongsa, visit impressive Trongsa Dzong and overnight at Trongsa.

En route to Phobjikha via Pele la pass. We will stop occasionally to see some of the high altitude species like Monal, Satyr Tragopan, and Spotted Laughing thrush, Himalayan Griffon, Brown Parrotbill, various Finches and Bush Warbler. After crossing the pass called Labenla, you will enter in wide open highland valley of Gangtey or Phobjikha. This area is the winter nesting ground for hundreds of endangered black-necked cranes from late October till early March. Visit Gangtey Gompa, one of the oldest Nyingmapa monasteries. From ancient Gangtey Gompa monastery, hike through the Nature trail that descends from pine forest into wide marsh land with dwarf bamboos. Besides black-necked crane, we may see Spotted Nutcracker, Greycrested Tit and Hen harrier. Overnight in hotel.

Early morning, we will look for Himalayan Wood Owl, and much sought rare Wood Snipe. After early lunch, depart for Wangdue & Punakha valley which takes about 4hrs. Stopping along the way to look for Ward’s Trogon, Yellow-rumped Honeyguide and mixed species flocks. Grey or white langurs are often seen after crossing the pass from Gangtey. Overnight in hotel.

After breakfast travel to Jigme Dorji National Park where our birding will be focused. In this area we should find Great Cormorant, Crested Kingfisher and Slaty-backed Forktail. We will see a wide selection of species today, but in particular we will be looking out for the Yellow-vented Warbler, and the delightful Spotted Wren-Babbler. Here is also a great opportunity to find the very rare and little-known White-bellied Heron, and Pallas’s Fish Eagle. Visit Punakha Dzong located at the confluence of Phochu and Mochu rivers. Overnight in

Today you drive to Thimphu (capital of Bhutan). Two hours later, you will drive at Dochula Pass (3,100 meters), which offers a spectacular view over the snowcapped eastern Himalayan Ranges, consisting of peaks averaging massive heights of 6,000m to 7,554m! The Pass is decorated with 108 stupas (chortens) built around a mound. Having covered much of the similar birding elsewhere, we will proceed to Thimphu straight to cover a half a day of sightseeing in the capital today. Overnight in comfortable hotel.

Spend morning hours in Thimphu to shop or cover some more of the sightseeing tour. Then drive for about 1hr to Paro, where you spend rest of the day, touring its beautiful temple and National Museum. Typical breeding birds of the area include River Lapwing, Oriental Turtle Dove, Large-billed Crow, Green-backed Tit, Brown Dipper, Blue Whistling Thrush, Himalayan Wagtail and Russet Sparrow. In winter, likely visitor include Green Sandpiper, Rosy Pipit, Rufous-breasted Accentor, and Black-throated Thrush. Overnight in Hotel.

A visit to Bhutan is incomplete without venturing to Paro Taktshang (Tiger’s Nest), one of the most sanctified and sacred Temples in Bhutan. The trail is broad and the walk of approximately 1.5 to 2 hours uphill takes you almost a kilometer above the Paro valley. It is perched on the cliff where Guru Rimpoche is said to have flown here on the back of a tigress when he brought the teachings of the Buddhist Dharma to Bhutan in the 8th Century. He subsequently meditated here for three months. The cave is said to be the origin of Buddhism in Bhutan. If you start your hike early, you may see Grey Wagtail, Common Sandpiper, Black Browed Tits, Spotted Laughing Thrushes, and Brown Dipper. Return to Paro, where we may have more time for stroll around the town. Farewell dinner in the evening. Overnight at Paro.

The guests will be Seen Off by a Representative of our company and the Tour Guide at the Exit Gate. Wish Bon Voyage!!!

WHAT WE INCLUDE IN OUR TAILOR MADE BHUTAN TOURS:

NOT INCLUDED IN OUR TAILOR MADE BHUTAN TOURS: