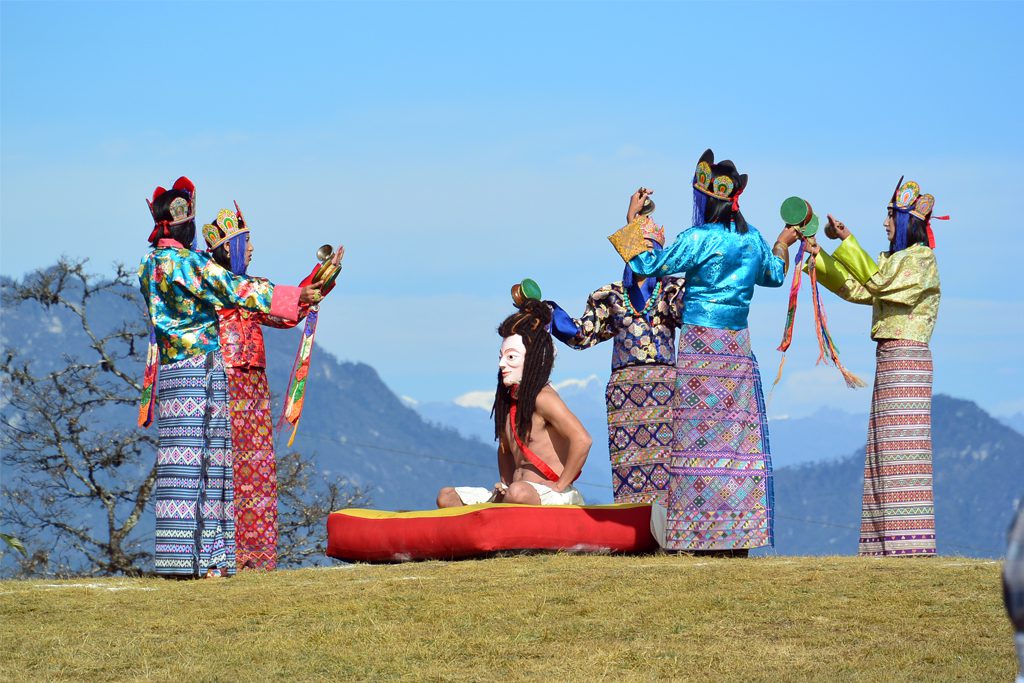 HIGHLIGHTS OF THE DRUK WANGYAL FESTIVAL

The Dochula Druk Wangyel Festival was established in 2011 in commemoration of His Majesty the Fourth Druk Gyalpo. The festival is held annually on December 13th at Druk Wangyel Lhakhang located at Dochula Pass. Dochula Pass is one of the most scenic passes in Bhutan, which offers spectacular views of the Himalayan mountain ranges.

Druk Wangyal Lhakhang (temple) was built over period of four years from 2004-2008 by Ashi Dorji Wangmo Wangchuck ( the Queen Mother of Bhutan) as a tribute to His Majesty the fourth King of Bhutan, Jigme Singye Wangchuck and armed forces after His Majesty led a successful operation against Indian militants who had occupied certain areas of Bhutan. The gallery of the temple has beautiful murals depicting some of the important events in the reigns of the Kings of Bhutan.

At your arrival at Paro International airport, your local tour guide will welcome you and transfer you to your hotel. Rest of the day is at leisure or you can choose to explore the enchanting Paro valley by visiting some of the important historical and spiritual sites in Paro. We suggest you to visit the Paro Rinpung Dzong, National Museum, the ruined Drukgyel Dzong and finally the historical Kyichu Lhakhang.

Then drive to Thimphu.

After breakfast drive for about 45 minutes to Dochula Pass (3140 m) to attend the Druk Wangyel Festival. In the clear winter sky you will get to enjoy the panoramic view of the Himalayan Mountain ranges. The Druk Wangyal Tshechu is a unique festival performed by the Royal Bhutan Army rather than monks or lay people. It is a tribute to the wise leadership of His Majesty Jigme Singye Wangchuck, the Fourth King of Bhutan. It also celebrates the continuous efforts of the Royal Bhutan Army in protecting the sovereignty and the stability of the country.

Afterwards we will drive to Punakha where on the way visit Royal Botanical Park at Lamperi, which is situated at an altitude range of 2,100m to 3,800m. The park (47 square kilometers), serves as the  biological corridor connecting to the Jigme Dorji National Park and Jigme Singye Wangchuck National Park. Overnight at hotel in Punakha.

After breakfast, visit the Punakha Dzong, located on the island of the Pho – Chu (male river) and the Mochu (female river). The dzong was built in 1637 by Zhabdrung Ngawang Namgyal (the person who unified Bhutan) to serve as the religious and administrative seat of the region. It was here that the dual system of government was introduced in the 17th century and in 1907, enthroned the first King GongsarUgyen Wangchuck. Damaged over the centuries by four catastrophic fires and an earthquake, the dzong has been fully restored in the recent years by the 4th King Jigme Singye Wangchuck. At the dzong, you can see the highest standards in woodwork.

After lunch drive to Metsina Village and take a 20 minutes’ walk to visit the Devine Madman’s Monastery-Chhimi Lhakhang, famously known for its fertility shrine, where one can receive a special fertility blessing.

In the evening you may visit Rinchengang village in Wangduephodrang where you will take a short hike through the village and have free interaction with the villagers. Round trip hike will take about 1 hr. At the same time you can view the ruins of Wangdue Dzong (the Dzong was razed to the ground by fire in 2012).

After breakfast drive to Phobjikha valley through the dense forests of the Phobjikha Valley you arrive at Gantey village where you see the Gangtey Monastery and visit the monastery. Phobjikha valley is part of the beautiful Jigme Singye Wangchuck National Park ( formerly known as Black Mountains National Park), one of Bhutan’s most important nature sanctuaries. Each winter it is home to a flock of 300 rare and endangered black-necked cranes. The surrounding hills and mountains are home to nomadic shepherds and yak-herders. This is one of the most remote and untouched regions in Bhutan and is only just opening its doors to the outside world.

The Black necked cranes start migration to this area from November each year. You will have refreshment and lunch at a resort/restaurant in this valley. Afternoon you can visit the Black Necked Crane Center and enjoy the fascinating sight of these birds in this beautiful scenic valley.

In the late afternoon drive back to Punakha and overnight at a hotel in Punakha.

After breakfast, drive through upper Punakha valley and take a hike through farmhouses to the beautiful Khamsum Yuelley Namgyal Lhakhang (temple) built by Ashi Tshering Yangdon Wangchuck (the Queen Mother of Bhutan) for peace and stability in this ever-changing world. This temple is situated on the hilltop overlooking the valley below. The leisurely walk up to the temple would take about an hour. Visit the temple and also enjoy the breathtakingly beautiful view from there.

Drive to Paro, visiting Semtokha Dzong en route. The Dzong, built in 1627, is the oldest in Bhutan. It now houses the Institute for Language and Culture studies. On arrival in Paro, check into the hotel. Overnight at your hotel in Paro.