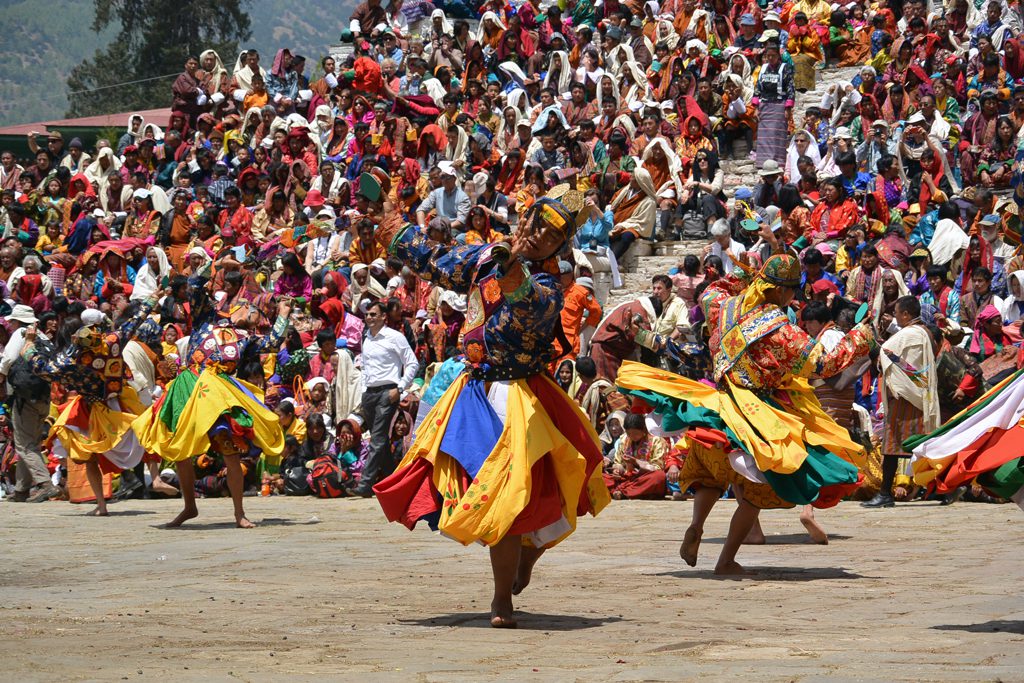 HIGHLIGHTS OF THE PARO FESTIVAL TOUR

Paro Festival is the most popular religious dance festival in Bhutan. It has been held annually since the 17th century when Zhabdrung Ngawang Namgyel (the founder of the state of Bhutan) and  Ponpo Rigzin Nyingpo initiated  Paro Tshechu festival together with the consecration of Paro Dzong (fortress) in 1644.

Paro Tsechu is held for 5 days beginning on the 10th Day of 2nd Bhutanese lunar month every year and in 2018 it is from March 27-31. The Paro festival offers a best opportunity to witness the Bhutanese’s rich culture and history. The Tshechu is a religious festival and by attending it, it is believed one gains merits.

It is also a yearly social gathering where the people come together to rejoice dressed in all their finery.

On the last day of Paro Tsechu there will be a display of a gigantic  thangkha (embroidered painting), the Guru Throngdrol.Thongdrols are especially impressive examples of Buddhist art and never fail to amaze viewers. They are considered so sacred that simply seeing a Thongdrol is said to cleanse the viewer off sin.

Upon arrival at Paro International airport, you will be welcomed by our company representative and the tour guide will receive and escort you to designated Hotels in Paro.

After lunch enjoy sightseeing around Paro, including a visit to the Ta Dzong Museum housing many religious relics, works of art and handicrafts offering a great orientation into Bhutan’s historical, cultural, and religious past. Next, visit 7th Century Kyichu Lhakhang, one of the 108 temples built in the 7th century by the Tibetan King Songsten Gampo.

In the evening, time free at leisure for own activities and relax in the hotel to acclimatization with Bhutan weather conditions.

Today you experience the color, excitement and spectacle of the Paro Tshechu Festival. It is the most divine and deeply symbolic of all the Buddhist festivals celebrated in Bhutan. Dressed in traditional finery, devotees flock to the Paro Dzong to proclaim their faith and receive blessings. The dances and costumes have survived unchanged for thousands of years, each dance is an exact re-enactment of visions seen by Bhutan’s great Buddhist saints and any changes would be seen as sacrilege. Terrifying Deities, Heroes, Novel Man and Ladies Lencham , Stag and Hounds. The dances are interspersed with folk songs and clowning aided by copious amounts of butter tea and a locally produced potent alcoholic barley spirit.

You will spend the whole day at Paro festival with lunch in between. You will also take time off to visit the interior of Rinpung Dzong, built in 1645 to defend the valley against Tibetan invaders. The Dzong is now being used as an administration center and school for monks. Then walk down to Rimpung Bridge (Traditonal Bridge), oldest bridge in Bhutan.

Early morning before dawn, you make your way to the early morning blessing from Guru Thongdroel (Thangka of Guru Rhinpoche). Today is the most auspicious day of the festivities and dances of the Heroes, Ging and Tsholing, the Eight Manifestatons, the Sixteen Fairies and the Religious Song are all performed in a magnificent cacophony of sound and color.

After witnessing the unveiled Thongdroel and receiving the blessing, you will return to your hotel for breakfast and then visit the National Museum, housed in the Ta Dzong (watchtower). Here is an intriguing collection of artefacts which provide you with a wonderful insight to the rich culture and heritage of the Kingdom of Bhutan.

From the Ta Dzong you will go to the festival ground to get a glimpse of the last day of Paro festival.

In the evening you will travel to Thimphu, the next destination on your tour in Bhutan.

After breakfast, begin our sightseeing with a short drive to Kuenselphodrang where largest Buddha statue in the country is perched on the hillock overlooking the Thimphu. Then visit National Memorial Chorten which was constructed in 1974 as a memorial for the third King of the country, King Jigme Dorji Wangchuck, who is widely regarded as the father of modern Bhutan. Next visit Changankha Lhakhang (temple) situated at a small hound overlooking the Thimphu valley was built in the 13th century by the illustrious Lam Phajo Dugom Zhigpo. The temple is considered the spiritual home of children born in the Chang valley.

Afternoon, visit National Museum which is a good place to see the art of traditional weaving being kept alive and preserved through exhibition and has a good collection of old textiles which are rich in colors and designs. After visiting the museum we will walk to School for Arts & Crafts; where students undertake a six-year course on the 13 traditional arts and crafts of Bhutan. Overnight at your hotel in Thimphu.

After breakfast, drive to Punakha via the Dochula pass. An hour’s drive from Thimphu will take you to this pass (3140 m) where one can have a superb view of the Eastern Himalayas on a clear day with a powerful binocular telescope. Visit the beautiful 108 chortens built on the hill by Her Majesty Ashi Dorji Wangmo for the security and well being of His Majesty the King of Bhutan. Also visit Druk Wangyel Temple which was built to honor His Majesty, the fourth king Jigme Singye Wangchuck. The past and future appear to merge in the details of the temple that tells the story of a supreme warrior figure whose vision pierces the distance future.

Drive onto Punakha, the old capital of Bhutan and presently the winter residence of the central monk body. Visit the Punakha Dzong, located on the island of the Pho-Chu (male) river and the Mochu (female) river. Visit the Dho Jha Gha Lam Temple.

In the evening, walk through the Metshina Village and take a 20-minute walk through the rice fields to the Devine Madman’s Monastery-Chhimi Lhakhang, famously known for its fertility shrine, where couples unable to concieve come here for blessing.

Overnight at hotel in Wangdue/Punakha.

After breakfast, drive through upper Punakha valley passing through farmhouses and take a leisure walk through farmhouses and then through nature to the beautiful Khamsum Yuelley Namgyal Chorten temple built by the Queen Mother of Bhutan for peace and stability in this ever-changing world. This temple is situated on the hilltop overlooking the valley below. The leisurely walk up to the temple would take about 1 hour. Visit the temple and also enjoy the breathtaking view from there.

After lunch,drive back to Paro. After a refreshment drive up the valley to visit the historic Drukgyel Dzong which was built in the 16th century to mark the Bhutanese victory over the Tibetan invaders.

After breakfast, you will drive to the Paro Airport for your flight to your onward destinations.