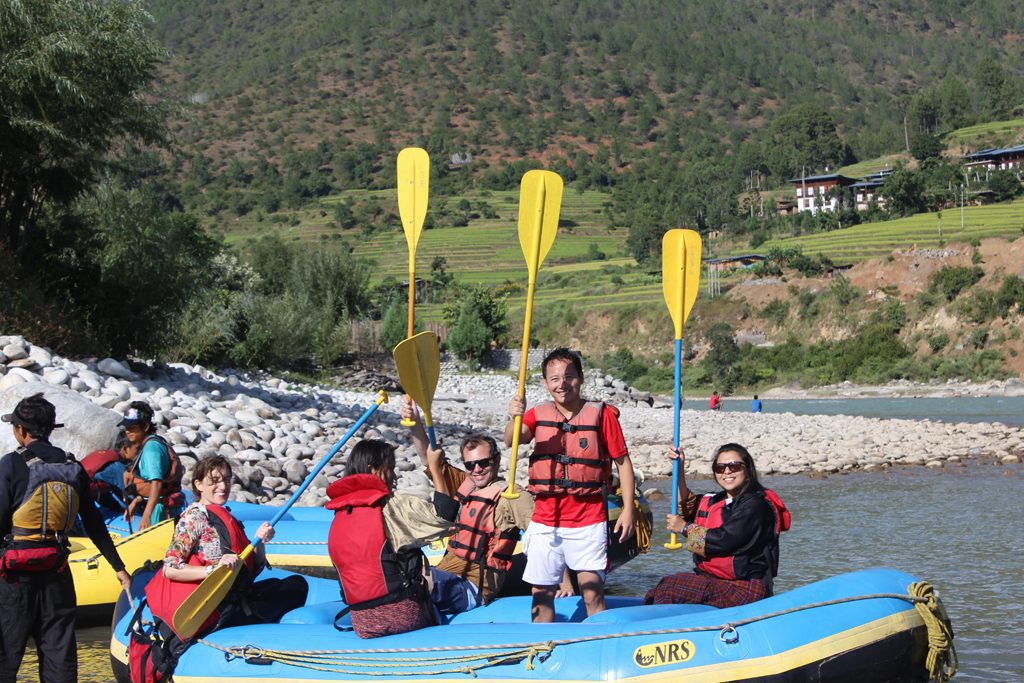 Pho Chhu and Mo Chhu Rivers Rafting is one of the most action packed adventures, amongst some of the most rafting. This rafting tour is generally conducted in Punakha. The Pho Chhu River has approximately 16km and is the most popular one for rafting and drifting followed by Mo Chhu River with 10 km. Both these rivers flows from different direction but immediately meet at the head of Punakha Dzong. The river flows through the protected and undisturbed valleys with an opportunity for rafter to experience amazing array of sites including terrace fields, scattered settlements, and farm house with green lush landscape.  Rafters will be amazed with its hair rising rapids with screaming and laughing joyfully rafting down the river in a rubber raft.

After lunch visit Simtokha Dzong.This was the first of the many dzongs constructed by Zhabdrung in 1631. NATIONAL MEOMRIAL CHORTEN, it was built in 1974 in memory of the third King Jigme Dorji Wangchuk by his mother. CHANGANGKHA LHAKHANG, is one of the oldest temple in Thimphu, dating back to the fifteen century. The place has an air of peace and tranquility, located as it is above and away from the city. TRASHICHHOE DZONG, “The Fortress of Auspicious Religion”, your last stop for the day. The Dzong can be visited only after 5 pm on week days, when the government office closed-or then during the day on Saturday/Sunday.

Today drive further north of Thimphu to visit TANGO GOMPA, this is a 300m hike and takes around one hour. Although founded by Gyalwa Lhanangpa , it was further developed by Lama Drukpa Kinley in the 15th century. Nearby is the cave where Zhabdrung meditated and believing that his spiritual powers had helped repel the Tibetan invasion, this gompa was presented to him in appreciation.

SANGAY GANG, heading towards the telecom tower which is at 8807ft/2685m and provides a vantage point for brilliant, clear views of the town and surrounding countryside.

MINI-ZOO, heading back, stop a few minutes at the ‘mini-zoo’ which is now a large outdoor enclosure that holds one of the strangest looking creatures you are likely to see- the takin.

DRUBTHOP GOMPA, a small building surrounded by prayer flags that now house the Zilukha Nunnery. Located above the dzong, this gompa is believed to protect it from fires.

DECHEN PHODRANG, descending further, your arrive at Dechen phodrang which was the original site of the dzong and is now occupied by the state monastic school.

NATIONAL LIBRARY, your drive will now take you past the rolling greens of the golf course with the grand National Library coming up on the opposite side. This was open in 1967 to preserve the ancient Dzongkha texts and act as a repository for thousands of old religious books and manuscripts as well as the wooden blocks used for printing.

NATIONAL INSTITUTE OF ZORIG CHUSUM, which offers a six year course on Bhutan’s traditional crafts for those who are artistically inclined.

FOLK HERITAGE MUSEUM, with its interior styled to resemble a typical farmhouse as it would have been a hundred years ago. The museum offers not only a glimpse into the past but also depicts the present reality of many remote rural hamlets.  “If you are in Thimphu over the weekend, try and visit the local open market with its vast array of fresh produce, handicrafts and other items.”

Mo Chhu (Female River) is one of the major rivers in Bhutan with its source in Gasa region, which is the northern district, that border to Tibet. The lakes that forms Mo Chhu (Female River) are –Laya Tsho (lake) near Laya Gewog, Sinchhe Glacier Lake in Laya Gewog, Mt. Gangchentag Glacier Lake, which comes together to form Mo Chhu (Female River). The river raise in Gasa province and generally flow downhill through the valley of Kabji and then generally flow towards southward to Punakha through the side of the Punakha Dzong and immediately meet with the Pho Chhu (male river) just below the Punakha Dzong. The Mo Chhu raft runs for about 10km and comprise around 10 rapids with 2- 2+ rapids.

Pho Chhu (Male River) is one of the major rivers in Bhutan with its source in Gasa region. There are several glacier lakes which comes together to form Pho Chhu River and generally flow downhill through the valley of Samadinkha and then generally flow towards southward to Punakha and immediately meet with the Mo Chhu (Female river) just below the Punakha Dzong. Pho Chhu has approximately 16km course with about 15 rapids of class II – IV and is the most popular for rafting in Bhutan. In the afternoon visit the magnificent Punakha Dzong saddled on the confluence of Pho Chhu and Mo Chhu River. It was built in 1637. The flamboyant architectural design of Punakha Dzong richly showcases the typical 13 traditional arts and architectures of Bhutan.

In the morning drive to Yabesa village and hike to through rice fields and up to Khamsum Yueley Namgyal Chorten, built by her majesty the queen Ashi Tshering Yangdon Wangchuk. Perched high on a hill on the bank of the river, the Chorten houses paintings belonging to Nyingmapa Traditions.Take a picnic lunch on a picturesque riverside before exploring the Wangduephodrang Dzong. Built in 1639 the strategically located Dzong is perched on a spur at the confluence of two rivers.

Drive back to Thimphu where you will have an opportunity to visit handicraft and souvenir stores. Afterwards proceed to Paro, visiting Semtokha Dzong en route. The Dzong, built in 1627, is the oldest in Bhutan. It now houses the Institute for Language and Culture studies. On arrival in Paro, check into the hotel. Overnight at your hotel in Paro.