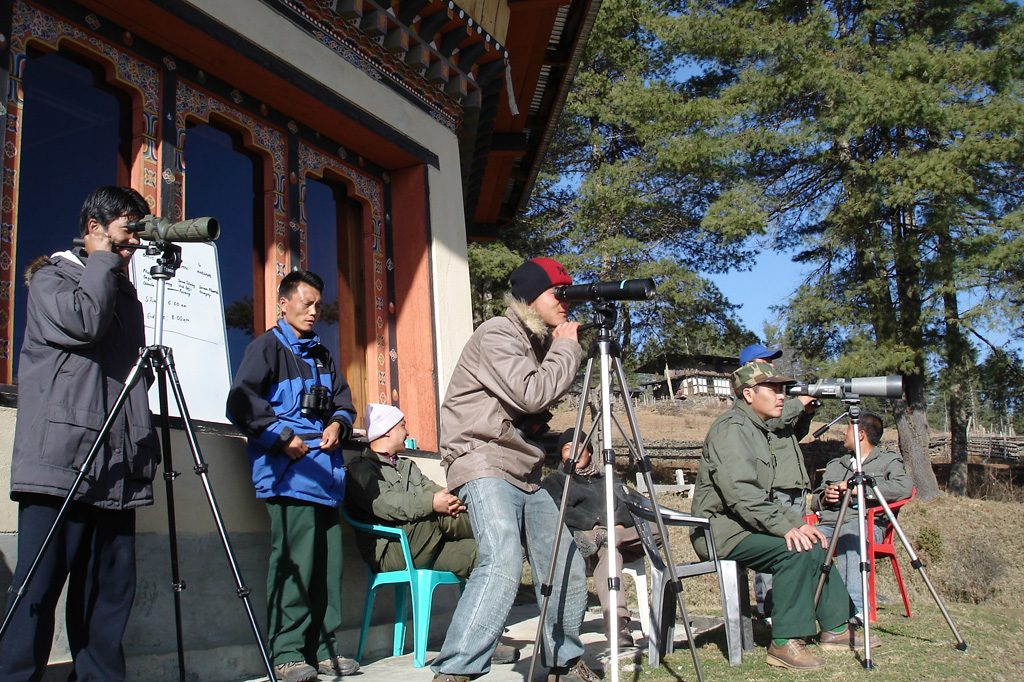 HIGHLIGHTS OF THE PHOTOGRAPHY TOUR IN BHUTAN

Bhutan Monyul Travel specialized adventures for photographers of all ability levels. Photography tour in Bhutan is more of seeing and shooting images of fascinating wildlife, Landscape & Botanical, that roams the rich forest tract of Bhutan. Over 51.32% of the geographical area of the country is under network of protected area and has allowed many landscape, birds and wildlife of Bhutan to continue to flourish. If you’re looking for a nature adventure that offers the ultimate in photography possibilities for pros and amateurs alike, choose a Bhutan Monyul Travel.

At your arrival at Guwahati airport, our representative from India will be there to welcome you and drive straight to Samdrup Jongkhar (Bhutan). The drive from Guwahati to border town of Samdrup Jongkhar (Bhutan) takes around 100km and it should not take more than two hours to negotiate the stretch. Reaching the border town complete the immigration and custom formalities and bid adieu to your one-day helpful guide from India, you then finally get into Bhutan. Drive straight to your hotel and rest day at leisure.

Today after your early morning hotel checkout drive to Trashigang. Trashigang lies at an elevation ranging between 600m – 4000m above sea level and is the largest district in Bhutan lies in the Far East on the bank of river Gamri Chhu, skirting up to the edge of the Indian state of Arunachal Pradesh. The region is once the centre of busy trade with Tibet. You will encounter wild flowers including Lantana camera, Bidens pilosia, Datura starmonium, Persicaria nepalensis, Tagetes minuta, Ipomoea purpurea, Osbeckia stellata, Persicaria nepalensis, Luculia gratissima, Mussaenda roxburgiiJusticia adhatoda, Leptodermis amoena, Cyanotis vaga, Mazus surculosus, Phytolaccaceae acinosa etc.

Regarded as the farthest and the biggest district in the country, Trashigang is also a home to the minority ethnic groups of Merak and Sakteng region featuring unique culture and tradition. Under its vast landmass, diverse cultural attractions are distributed unevenly in different localities. Today your day excursion takes you to Radhi village which is a common feature tour for many of tourist as the village is very popular for the production of locally woven silken garments in the country. The region’s women are well known for their weaving skills, which are past down through generations. Radhi village is famous for Bura ghos and kiras which find their way to markets in the capital and the biggest towns.

Carrying a picnic lunch your day excursion takes you to one of the remotest districts in Bhutan, with a population of about 15,400 scattered across its eight blocks. Wedged like an upside down tooth in the north-eastern corner of the kingdom, is considered the spiritual home of Bhutan’s beloved kings, and boast some of the most sacred sites of pilgrimage in the country. The drive is 76km each way and is a comfortable 6 hours excursion at a relaxed pace. It offers some great spots for a quite sojourn with nature, driving through swirling waters with sound and winds-tossed soothing your journey. You will travel initially through open landscape through sweeping down through tighter valley with a glimpse of fast flowing Kuri Chhu River.

We suggest you to make an early start since this journey are a bit long covering 198km and takes around 7 hour drive. There are no separate sightseeing opportunities but the journey from Mongar to Bumthang is one of the most beautiful in the Himalaya. As you drive through rhododendron and conifer forest at high point of the day- Thrumshing La (12,000ft/ 3659m), usually wreathed in swirling vaporous mists offers a breathtaking view of the surrounding peaks and the landscape promising high drama as you plummet breathtakingly from tree line as you traverse trough high pass. Cresting the pass you loop down gradually into a wide open countryside Ura village (10,168ft/3100m) on the left side.

While in Bumthang, more than landscape photography the region is home to some of the kingdom’s most ancient and precious Buddhist temples. After few days savoring in enchanting pristine natural beauty, it is now time to steep in history and architectural splendor. Your day sightseeing in Bumthang begins with visit to the temple complex at Kurjey Lhakhang. It is an important place of pilgrimage for devout Bhutanese. Coming up next is the historical and oldest temple Jambay Lhakhang. It was built in 659 AD by Tibetan King Songtsen Gampo. Coming down you can make a short hike through crossing the Chamkhar Chhu to visit the Tamshing Lhakhang and next to Jambay Lhakhang is Kencho Sum Lhakhang.

With early hotel check out, drive to Phobjikha valley under Wangdue district. Crossing Chamkhar valley the road climbs steep above Gyetsa and gradually takes you to Yotong La at 11,000ft/3354m. Crossing the pass it is all the way downhill until you reach Trongsa. Trongsa in general has a significant place in Bhutanese history connected with the linage of Bhutan’s kings. From Trongsa the road takes you ascend through beautiful landscape, farmhouse and farmland and finally take you up to Pele La Pass (11,070ft/3375m). The region is popularly known as the Black Mountains and a short drive further off the main road takes you to Lawala, a crested ridge at 10,800ft/3293m) you will then gradually descent into the glacier Phobjikha valley.

There are optional hiking trail available in Phobjikha with great view of the valley and surrounding mountains. If you are here in between the months of October to early March, the valley is famed for its migratory Black-necked Crane. As many as three hundreds of these visitors arrive here every winter.

After you leisurely breakfast in the hotel, drive to Punakha, the ancient capital of Bhutan. Punakha is inextricably linked to some of the most momentous events in the history of Bhutan, and deserves its reputation as one of the most beautiful and significant regions at the heart of Bhutanese culture. Today Punakha’s significance to the Bhutanese nation is emphasized by the fact that it remains the winter residence of the national clergy and His Holiness the Je Khenpo, the Chief Abbot of Buddhist Bhutan. As you near Lobesa make a pleasant 30-40 minute walk from the road head through cultivation field and farmhouse to Chemi Lhakhang.

A 30-minute drive takes you to Kabji Serigang initially passing through terrace of rice fields and vibrant farmhouse. About two hours hike up to Chorten Ningpo offers a beautiful walk with lovely village, orange groves and the opportunity to experience the daily activities of the local people. The temple on the mountain top is revered by many of the local people and dated back to 15th century. Visit the impressive Khamsum Yueley Namgyel Temple. It offers a scenic view of the valley below and the surrounding mountains adding stunning sights to your photo shot. In the evening visit the historical Punakha dzong saddled on the confluence of Mo Chhu and Pho Chhu River. This impressive fortress was built as far back as 1637 and was the second mightiest dzong built by Zhabdrung Ngawang Namgyel.

In the morning hour before you depart to Thimphu, drive further north of your hotel to visit Nalandra Buddhist Studies. This historical site was founded by Je Gyelwa Shakya Rinchen where he had a clear vision of the clarifiers of the teaching of Buddha known as the Six Ornaments and the Two Supreme Ones of India, conducting religious discussions at this place. Returning back make a short stop at the Nunnery. It offers a great view of the landscape and the valley filled with paddy with white wall traditional building that contrast with the landscape. Coming down to the main road drive straight to Thimphu. En route stop at Dochu La pass and savor the enchanting pristine natural of the land.

Today you will do sightseeing in Thimphu and in the evening drive to Paro which takes only an hour drive. In the morning drive further north of Thimphu and visit the Cheri or Tango Goemba. This was built by Zhabdrung Ngawang Namgyel in 1620 and is the place where he first established the body of monks. If you are enthusiast – we recommend taking an hour walk up to Tango University. The goemba sits at the edge of a richly forested hill with its great wall appear stunning in contrast to the surrounding foliage and dominate the entire hillside. After lunch visit the Institute of Zorig Chusum offering a six-year course on traditional Bhutanese arts and crafts. If you are here in the weekend, visit the Centenary Farmers Market lies at the bank of Wang Chhu River. In the evening drive to Paro.

We suggest you to make an early start since the hike to Tiger’s Nest is quite an uphill task and takes around 3-4 hours walk at an average speed. This spectacular day hike to the magnificent Taktsang Goemba perched cliff side is an important Buddhist pilgrimage sites in all of Himalayas. According to the legend Guru Padmasambhava came to Taktsang in the eight century, flying from the east of the country on a back of a tigress. He meditated in the cave for three months and then donning his terrifying form of Dorji Droloe subjugating the evil spirit residing in the region. Later in 17th century the original temple was built by Druk Desi Tenzin Rabgyel. In 1998 a mysterious devastating fire burn down almost all the complete complex and in the same year it was rebuilt to its original structure that you see today.

Today is the last day of your trip to Bhutan and it is time for you to take the memories back to your country. We bid you a sad farewell.

WHAT WE INCLUDE IN OUR TAILOR MADE BHUTAN TOURS:

NOT INCLUDED IN OUR TAILOR MADE BHUTAN TOURS: