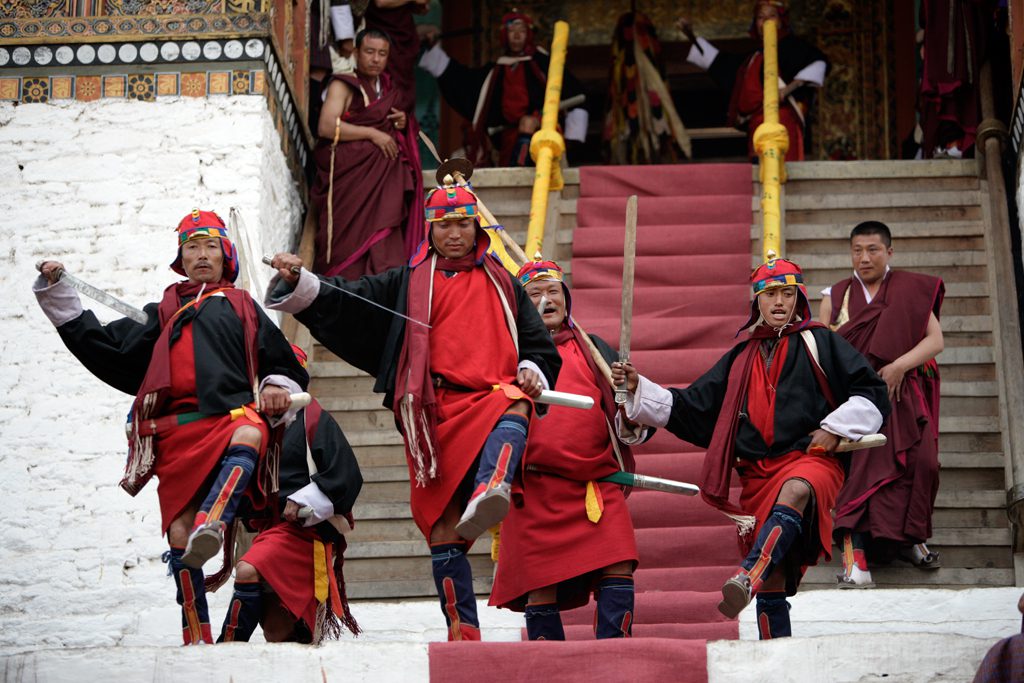 HIGHLIGHTS OF THE PUNAKHA FESTIVAL

Punakha Festival is held in Punakha located in the western part of Bhutan and this place has critical importance in the history of Bhutan since the time of Zhabdrung Ngawang Namgyel, the Buddhist Saint who unified Bhutan, in 17th century.

During 17th century Bhutan was invaded several times by Tibetan forces seeking to seize a very precious relic, the Ranjung Kharsapani.  Zhabdrung Ngawang Namgyal led the Bhutanese to victory over the Tibetans and to commemorate the triumph he introduced the Punakha Drubchen. Since then Punakha Drubchen became the annual festival in Punakha.

The Punakha Drubchen is a unique festival because it hosts a dramatic recreation of the scene from the 17th century battle with Tibetan army. The ‘pazaps’ or local militia men dress in traditional battle gear and reenact the ancient battle scene on the last day of Punakha Drubchen.

Punakha Festival was introduced in 2005 in response to the requests made by Punakha District Administration and local people to host a Tshechu in order to better preserve Buddhist teachings and keep alive the noble deeds of Zhabdrung Rimpoche.

Both the festival consists of typical masked dances which are very colourful and interesting, the events and enactments are different on each day. Punakha Dromchoe is a five day long festival dedicated to the goddess Mahakala. The religious aspects are performed in the same manner as in early times.

The drive to Thimphu – world’s smallest capital takes about an hour on a well paved two lane road that follows Paro River downstream to the confluence with Wang Chu (Thimphu River). The 60 kms road then turn upstream towards Thimphu along the Wang Chu. Check in at the designated hotel in Thimphu.

Afternoon visit Tashichhoe Dzong, a fortress of the glorious religion. It was built in 1641 by Zhabdrung Ngawang Namgyel and was reconstructed into present structure by the late King, His majesty Jigme Dorji Wangchuck in the year 1962-1969. Then visit Craft Bazaar where craftsmen and artisans from across the country display and sell their handicrafts and Government-run Handicrafts Emporium and local crafts shops, to browse through examples of Bhutan’s fine traditional arts. Here you can buy hand-woven textiles, thangkha paintings, masks, ceramics, slate and wood carvings, jewelry, and other interesting items made from local materials.

After breakfast, begin our sightseeing with a short drive to Kuenselphodrang where largest Buddha statue in the country is perched on the hillock overlooking the Thimphu. Then visit National Memorial Chorten which was constructed in 1974 as a memorial for the third King of the country, King Jigme Dorji Wangchuck, who is widely regarded as the father of modern Bhutan. Next visit Changankha Lhakhang (temple) situated at a small hound overlooking the Thimphu valley was built in the 13th century by the illustrious Lam Phajo Dugom Zhigpo. The temple is considered the spiritual home of children born in the Chang valley.

Afternoon, visit National Museum which is a good place to see the art of traditional weaving being kept alive and preserved through exhibition and has a good collection of old textiles which are rich in colors and designs. After visiting the museum we will walk to School for Arts & Crafts; where students undertake a six-year course on the 13 traditional arts and crafts of Bhutan. Overnight at your hotel in Thimphu.

You will also visit the Punakha Dzong, located on the island of the Pho – Chu (male river) and the Mochu (female river). The dzong was built in 1637 by Zhabdrung Ngawang Namgyal to serve as the religious and administrative seat of the region. At the dzong, you can see the highest standards in woodwork.

After lunch drive through upper Punakha valley and take a hike through farmhouses to the beautiful Khamsum Yuelley Namgyal Lhakhang (temple) built by Ashi Tshering Yangdon Wangchuck (the Queen Mother of Bhutan) for peace and stability in this ever-changing world. This temple is situated on the hilltop overlooking the valley below. The leisurely walk up to the temple would take about an hour. Visit the temple and also enjoy the breathtakingly beautiful view from there.

After breakfast attend the first day of Punakha Tsechu which will be held at the courtyard of Punakha Dzong.

In the evening you may visit Punakha town and market.

After breakfast drive to Phobjikha valley through the dense forests of the Phobjikha Valley you arrive at Gantey village where you see the Gangtey Monastery and visit the monastery. Phobjikha valley is part of the beautiful Jigme Singye Wangchuck National Park (formerly known as Black Mountains National Park), one of Bhutan’s most important nature sanctuaries. Each winter it is home to a flock of 300 rare and endangered black-necked cranes. The surrounding hills and mountains are home to nomadic shepherds and yak-herders. This is one of the most remote and untouched regions in Bhutan and is only just opening its doors to the outside world.

The Black necked cranes start migration to this area from November each year. You will have refreshment and lunch at a resort/restaurant in this valley. Afternoon you can visit the Black Necked Crane Center and enjoy the fascinating sight of these birds in this beautiful scenic valley.

In the late afternoon drive back to Punakha and overnight at a hotel in Punakha.

Early morning go to the Punakha Dzong to witness the unfurling of Thongdroel (giant silk Thangkha) which is unveiled on the last day of Punakha Tsechu.The thongdroel is usually unveiled at dawn and it is then let down to the ground and ceremoniously rolled and folded away before the first rays of the sun can reach it.It is believed that it brings blessings to all who view it.

Then return back to your hotel and after breakfast get a glimpse of the last day of Punakha tsechu and then travel to Paro with lunch enroute.

On arrival at Paro visit Rinpung Dzong, built in 1645 to defend the valley against Tibetan invaders. The Dzong is now being used as an administration center and school for monks.Then walk down to Rimpung Bridge (Traditonal Bridge), oldest bridge in Bhutan. Then visit Farm houses in Paro Valley and a visit to a farm house offers a good glimpse into the lifestyle of a farmer and where you can enjoy authentic Bhutanese dinner.

Overnight at a hotel in Paro.