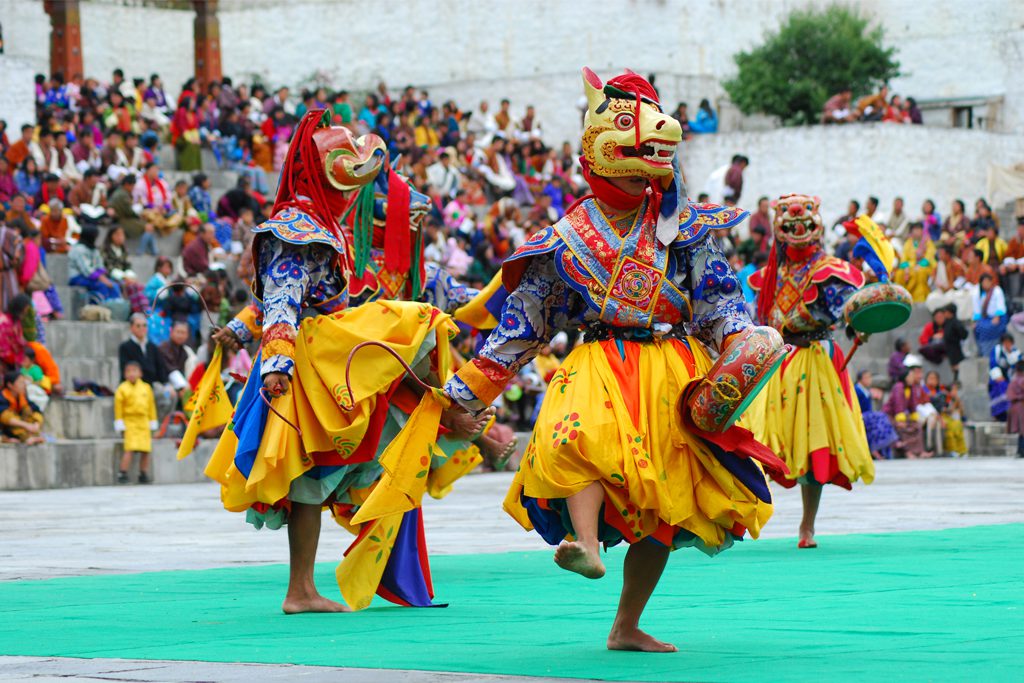 HIGHLIGHTS OF THE THIMPHU FESTIVAL TOUR

Thimphu Festival one of the biggest festivals in the country. This festival is held in the capital city for three days beginning on 10th day of the 8th month of lunar calendar. This Tshechu is witnessed by thousands of people many of which travel from neighboring Dzongkhags (districts) to attend the festivities. The actual Tshechu is preceded by days and nights of prayer and rituals to invoke the gods.

The Thimphu Festival was established by the 4th Temporal Ruler, Gyalsee Tenzin Rabgay in 1867. On that time the Tshechu consisted of only a few dances being performed strictly by monks. These were the Zhana chham and the Zhana Nga chham (Dances of the 21 Black Hats), Durdag (Dance of the Lords of the Cremation Ground), and the Tungam chham (Dance of the Terrifying Deities). In the 1950s the third King Jigme Dorji Wangchuck, introduced numerous Boed chhams (mask dances performed by lay monks). These additions added colour and variation to the festival without compromising its spiritual significance. Mask dances like the Guru Tshengye (Eight Manifestations of Guru), Shaw Shachi (Dance of the Stags) are enjoyed because they are similar to stage-theater.

To farmers, the Tshechu is also seen as a break from farm life. Its an occasion to celebrate, receive blessings and pray for health and happiness.

The drive to Thimphu – world’s smallest capital takes about an hour on a well paved two lane road that follows Paro River downstream to the confluence with Wang Chu (Thimphu River). The 60 kms road then turn upstream towards Thimphu along the Wang Chu. Check in at the designated hotel in Thimphu.

After breakfast, drive to Tashichhodzong to attend the first day of the Thimphu Tshechu. You will see locals dressed in their finest clothes who have walked from miles around to attend the festivities. They come to watch masked dances, to pray, and to feast. While the underlying purpose of the festival is spiritual, dances are more often like plays, telling stories where good triumphs over evil, or depicting significant historical events, especially surrounding the life of Bhutan’s patron saint, Padmasambhava (also known as Guru Rinpoche). There is inevitably a great deal of socializing as well.

After a leisurely breakfast, we will attend Thimphu Tshechu upto Lunch time or return back to the Festival Ground after lunch.

After breakfast drive to Yabesa village and hike to through rice fields and up to Khamsum Yueley Namgyal Chorten, built by her majesty the queen Ashi Tshering Yangdon Wangchuk.

Drive back to Thimphu where you will visit Textile Museum, Handicrafts Emporium, Crafts Bazaar where Bhutanese textiles and other arts and crafts are displayed and can be purchased.

Afterwards proceed to Paro, on arrival in Paro, check into the hotel. Overnight at your hotel in Paro.

Breakfast in the hotel, then drive to the airport for flight to your onward destination.
Tashi Delek!