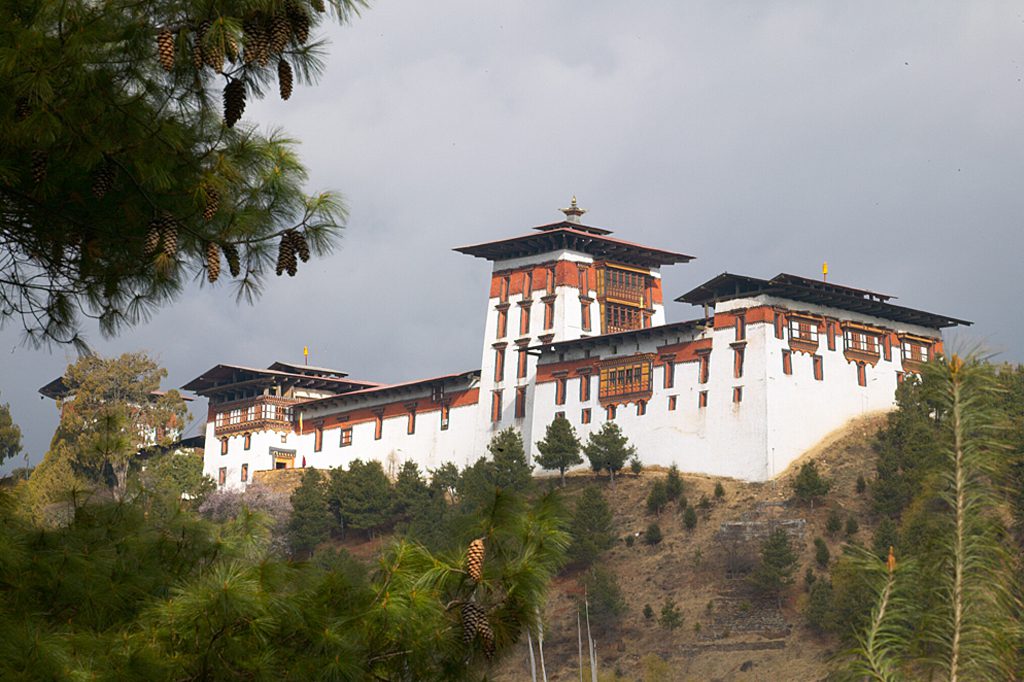 HIGHLIGHTS OF THE CENTER BHUTAN TOUR

Welcome to Bhutan – the land of happiness – one of the most sought after travel destinations today. Nestled in the foothills of Himalaya, Bhutan has always remained an independent kingdom. It remained closed to the outside world for a long time; its age old culture, tradition, spiritual heritage and environment are still intact. Bhutanese are deeply religious, practice Mahayana Buddhism. The country is dotted with Buddhist monasteries, chortenss (Stupas), prayer flags and monuments.

The land of Happiness kingdom is a trekker’s paradise and an environmentalist’s dream. With 72.5 percent of the country under forest cover, Bhutan’s pristine ecology is home to rare and endangered flora and fauna.

This spiritual land is the last bastion of the Vajrayana school of Mahayana Buddhism which provides the essence of a unique identity for the 750,000 people.

Sightseeing After lunch visit the fascinating Rinpung Dzong meaning ‘fortress of the heap of jewels’, which is the seat of the Paro district built in 1645 by Shadrung Ngawang Namgyal. Then visit a Buddhist monastery and fortress on the northern edge of the city of Thimphu. This has traditionally been the seat of the Druk Desi (or “Dharma Raja”), the head of Bhutan’s civil government, an office which has been combined with the kingship since the creation of the monarchy in 1907.

The drive from Thimphu to Punakha takes us first to the Dochula Mountain Pass in the snow covered Himalayas. Here are 108 memorial chortens or stupas built by the eldest Queen Mother. A must visit to Punakha Dzong, the most beautiful dzong in the country, especially in spring when the lilac-coloured jacaranda trees bring amazing colours to the dzong’s characteristically towering whitewashed walls. After lunch hike to the Devine Madman’s Monastery, famously known for its fertility shrine.

Khamsum Yulley Namgyal stands majestically on a strategic ridge above the Punakha valley. Built over a period of 14 years, Bhutanese craftsmen including carpenters, painters, and sculptors consulted holy scriptures rather than engineering manuals, to construct this 4-storey temple.

Visit Gangtey Gonpa, the seat of the Ngyingmapa Buddhism, one of the religious sects in Bhutan. The present reincarnate is the 9th descendant of Terton Pemalingpa. We will visit Gangtey Gonpa monastery and take a stroll around the place. This place serves as the wintering place for endangered black-necked cranes migrating from Tibet from November to February to escape harsh winter there. The road to Gangtey passes through dense forests and oak, rhododendron tress and is beautiful.

Bumthang is the general name given to combination of four valleys: Chumey, Choekhor, Tang and Ura with altitude varying from 2,600m to 4,000m. It is home to many of prominent Buddhist temples and monasteries and was the seat of the government until the reign of second king.

Day 6: Bumthang Sightseeing This region that spans from 2,600-4,500m is the religious heartland of the nation and home to some of its oldest Buddhist temples and monasteries. Tales of Guru Padmasambhava and the tertons (“religious treasure-discoverers”) still linger in this sacred region. The district is sub-divided into the four blocks of Chokhor, Chumey, Tang and Ura. The valleys are broad and gentle carved by the ancient glaciers. The wide and scenic valleys draws a large number of tourists each year.

Pelela pass at 3300m is an important dividing range that separates Western Bhutan from Central and Eastern Bhutan. Crossing this important Pass, one may enjoy the pastoral feeling as you drive deeper into the valley with meadows where sheep and yaks graze. If you are a bird watcher, look out for the specialty called the Wren Babbler taking refuge underneath bamboos.

Trongsa, the sacred and the temporal heart of the country is the first district that you will come across.

This small factory produces traditional Bhutanese paper handmade from the bark of the daphne bush and you can see the whole process. Another unique structure is the prominent National Memorial Chorten, which is predominantly white with spires of gold, was erected in 1974 in honour of the father of modern Bhutan, the third king of the country. A visit to Kuensel Phodrang alias Buddha Point is a gigantic Buddha statue, which houses over one hundred thousand smaller Buddha statues.

Visit one of the oldest monasteries in the country built in the 7th century by the Tibetan King Songsten Gampo and the ruins of Drukgyal Dzong. This fortress was built around 1644-49 to commemorate the Bhutanese victory over the Tibetan-Mongol forces. It was later burnt in an accidental fire in 1951.

Paro is a valley of religion and myth. The most famous landmark, the Taktsang Monastery (Tiger’s Nest), stands on a granite cliff about 800m above the valley. Legend has it that Guru Rinpoche, a famous Buddhist saint, flew to Paro on a tigress and meditated at Taktsang. The monastery is considered as a national treasure of Bhutan.

Visit Paro’s weekend market before your departure. This market isn’t very large but it has a traditional feel and has some unique local products like organic Tsirang honey, squares of dried jellied cow skin known as khoo (a local snack). Drive to the airport for your departure.